Although I was raised predominantly by my mother, I’m a lot like my father – and that extends down to my tastebuds.  I had lunch with my father at his regular workday lunch spot recently and the waitress laughed when I ordered root beer.  My dad followed suit.  We both love it.

My quest for lactofermented soda actually started with a quest for root beer, but it’s a little more complicated than the apple/ginger guy I posted about yesterday, so I wanted to tackle it second.

I like to make it in small batches because I’m still tweaking the recipe, but this is the current incarnation: 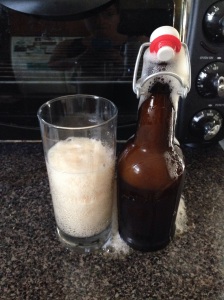 Beware when opening!  There will be foam!

Generally speaking most, if not all, of the weirder things (sassafras, sarsparilla, wintergreen, cinnamon sticks, swing-top bottles) can be found at the home brew store.  Mine didn’t have sassafras and I’m really into wildcrafting/foraging…soooooo I went for a hike and went looking for sassafras trees.  The only ones I ended up finding were in a stand that had been planted about two years ago.  I picked up some downed branches and yanked up a couple of seedlings that had sprung up too close to the main trees (as joggers stared at me, ha!) and brought them home.  My first batch of root beer had chopped twigs (no leaves) and what little bits of root I could find grated into it.  It wasn’t as strongly flavored as subsequent batches that were made after the root I ordered arrived….but I rooted one of the saplings (hopefully it survives) and in a few years I’ll have as much root as I can dig – and no joggers staring at me. 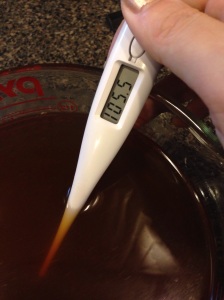 Not quite blood temperature!

Sassafras tree.  In the Spring, I’ll find a good spot for her.